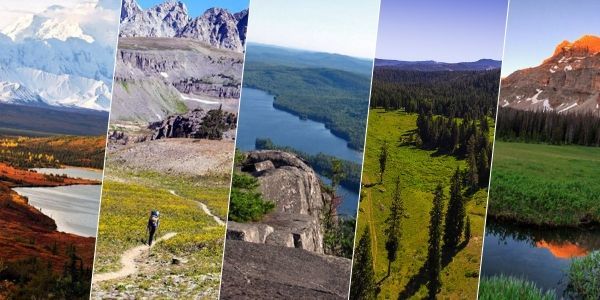 Top 5 Best Backpacking Trips in the US | Backpackers Trip

This is the right time for backpacking and you have just started planning your trip, all the best. In this article we will cover the 5 best backpacking trips in the US; backpackers itching to visit in 2022.

Alaska is always a great place for wild expeditions. KESUGI RIDGE trail is a through hike with about 36.2 miles long in Denali State Park in Alaska. This trail offers an outstanding vista of the Alaska Mountains and the wild. That's why we have brought it at the first of our top 5 best backpacking trips in the US guide. The trail includes Denali the highest mountain peak in North America and also the third-highest of the seven summits. The mountain's peak is 20,310 feet (6,190 meters) above sea level. If you are already planning to make your backpacking trip in KESUGI RIDGE then do some research. Because some of the access points may remain closed. The main reason is flood and the second reason is the excessive number of bears. So prepare like the best. Keep compass and bear spray in your backpack. Summer and Fall are the best seasons to hike in KESUGI Trail.

Backpacker Magazine calls TETON CREST TRAIL the “best hikes ever” for its fascinating and constant views. This is a 64km long hiking trail in the state of Wyoming. The trail expands from the Phillips Pass, through the border of Bridger Teton and Caribou-Targhee National Forests and on the other side to the String Lake in Grand Teton National Park. You have to get permission as Teton is the house of bears. And it's necessary to carry bear spray with you.

3. Part of the Appalachian Trail - MAINE

Part Of the Appalachian Trail - MAINE

The Appalachian trail connects fourteen US states with 2200 miles of journey. And Maine is the hardest and challenging part of that Appalachian trail with 281 miles. Mahoosuc Notch at the western section of Maine includes a mile-long stretch of boulders which called the hardest mile of the trail. The Kennebec River crossed through the central Maine section at a point where it is 200 ft wide. The longest and most isolated portion throughout the trail is called “Hundred-mile wilderness” Being tough and challenging Maine has always been the most desired expedition for backpackers.

John Muir Trail is a long-distance trail located in the Sierra Nevada mountain range of California. It is named after a Scottish Environmentalist John Muir who was the founder of the Sierra Club. John Muir Trail passes through three national parks: Yosemite, kings canyon and sequoia national park. The trail length is 213.7 miles starting from the northern terminus at Happy Isles in Yosemite Valley and the southern terminus located on the summit of Mount Whitney. Majority of the length of the trail is in the High Sierra backcountry and its wilderness areas. The John Muir trail has been illustrated as “America’s most famous trail” For adventurous hiking and backpacking expeditions.

The best time to hike the trail is from July through September. So what are you waiting for, get outdoors and enjoy your life.

The United States has more than 63 national parks full of wilderness. In this article, we've covered only top 5 of them. You can get the complete list of national parks by state here.

Here we go with the top 5 best backpacking trips in the US. Now pack your backpack, get outdoors and enjoy your trip.

Best Backpacking Tips and Safety Skills to Know About!